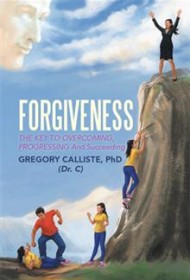 In his book, Forgiveness: The Key to Overcoming, Progressing And Succeeding, Dr. Gregory Calliste, shares how forgiveness helped him move forward in life after a betrayal in his career as CEO of a hospital in the Caribbean.

Through 15 chapters, Dr. Calliste tells the story of an attempted coup of his job, and details the results of his forgiving the Board members who tried to oust him, the punishment God meted out to them, and the rewards he’s experienced because he was able to forgive his enemies.

Numerous biblical accounts of forgiveness and God’s vengeance and punishment consume a large portion of the book. (Beautiful forgiveness prayers for various offenses appear in a chapter titled “Some Common and Tough Injustices to Forgive and Sample Prayers for Them.”)

In his chapter on “Awakening of Dormant Talents,” Dr. Calliste tells how “God has stirred up my writing talent and inspired me to write this book to share my testimony, which I hope will help millions of people around the world to deal with the issue of forgiveness/unforgiveness.” He also shares some of the song lyrics he has written as a result of forgiving and, like his writing, hopes that millions will be inspired by them. Both the text and the song lyrics would benefit from professional editing, however.

Although he claims to have healed and moved on from his experience, the focus on his enemy’s faults throughout the book suggests that the author really hasn’t forgiven them. These negative details override the positive sections, making the author appear arrogant—especially since he offers readers scant information on his own failings and need for forgiveness.

Those looking for a book on this topic will find Forgiving the Unforgivable by David Stoop, Ph.D. a better investment. Readers desiring prayer examples for forgiveness, however, will discover a few gems in Forgiveness: The Key to Overcoming, Progressing And Succeeding.