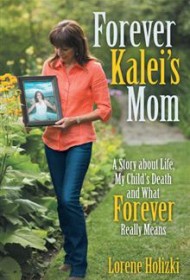 In this concise memoir, Lorene Holizki explains how she endured after her 16-year-old daughter, Kalei, died in an automobile accident. It’s a painful story, but in explaining her grief process, Holizki offers a blueprint to parents who have lost a child and insight to others wanting to support traumatized parents.

Holizki divides the book into three parts: life before the collision — a time when she became pregnant during a Hawaiian fling, then returned home to Alberta, Canada, to raise her infant with her parents’ help; the crash and its immediate aftermath; and life without Kalei.

Kalei died in 2001, but Holizki’s descriptions of her anguish are vivid and fresh. In the first year, she creates a “sixth-sense universe” to connect with Kalei’s spirit and a “regular universe” where she goes through the motions of real life. This invention allows for conversations with her angel daughter in which Kalei tells her not to hate others for her death but to step into a future based on love. Eventually, Holizki reconciles those universes.

Holizki weaves descriptions of events, such as returning unworn clothing Kalei had bought, with inspiring stories of her own spiritual growth. She works hard to turn “regular universe” pain into larger lessons. Holizki wrestles with a way to answer when people unaware of Kalei’s death ask if she has children. She comes up with a comfortable response: “I am forever Kalei’s mom.” It tells people she has a child who died, she is still her mom and she’s OK with talking about it – and she hopes the world adopts that phrasing.

Holizki’s brisk pace and firm focus omit extraneous information, including details about “regular universe” issues such as her job and friends. Readers may be left wondering, though, how Holizki’s parents coped with the loss and whether Kalei’s biological father was part of her life.

Honest and never preachy, Forever Kalei’s Mom advances our conversation about life, death and the complicated world of grief.