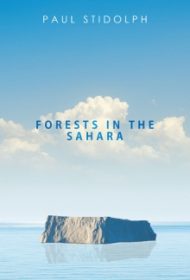 In Paul Stidolph’s engaging novel, a visionary project intended to help alleviate drought in Africa falters amidst the unlawful activities of nefarious investors.

It’s been 20 years since Jeffrey Harvey and members of a post-graduate group known as the Warlocks had the idea to harvest ice from Antarctica and transport it along with a bounty of purifying tree saplings to the Sahara. With the support of his Norwegian military-trained, bisexual girlfriend and the purchase of a giant oil tanker, the project is set to launch.

Unfortunately, Harvey’s longtime dream is temporarily derailed as past indiscretions with a male student surface, as well as accusations of stolen research work and his possible involvement in a brutal murder. Unbeknownst to Harvey, additional problems loom. The Clerkenwell Angels, labeled “investors without sentiment,” plan to take control of the tanker, as they’ve secretly stashed $200-million worth of heroin onboard for their worldwide drug operation.

This is a well-thought out drama, buoyed by a multitude of complex characters. Aboard the unique floating vessel dubbed “The Moringa,” science and technology provide a backdrop for escalating conflict and interactions. Stidolph aptly constructs the tanker as a presence unto itself. Not only does the refurbished watercraft serve to stage the story’s activity, its cavernous passageways, hidden cargo areas, and multi levels seem symbolic of the clandestine relationships and unscrupulous business dealings that unfold throughout the voyage.

With a nice balance of narrative and dialogue, the plot maintains a steady course, though at times the writing can be verbose, including lengthy descriptions about the project, a docking airship, and crew duties.

From intimate partner swaps, to friends turning foe, several twists and turns enliven this literary venture. The final denouement is a shocker that prompts one to wonder if Stidolph is done with these characters. Time will tell. For the moment, he offers an entertaining blend showcasing love and honor, science and faith, death and destruction on the high seas.