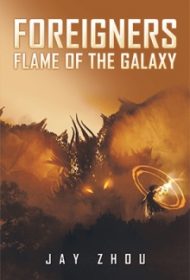 Jay Zhou’s Foreigners: Flame of the Galaxy is an apocalyptic science fiction tale in which the armies of two alien worlds invade Earth and fight for dominance.

In this story, Zhou presents the Barauny, demons desperate to seize the planet and colonize it as their own homeworld is dying. Determined to stop them are the Elyos—angels who have fought this war with the Barauny “for billions of years.” Caught in the middle are what remains of earth’s human armies, as well as the earthling Lifeseekers and the Scavengers—survivors of the initial Barauny onslaught on earth.

This is a complex, vividly imagined dystopic tale with plenty of action and battle scenes. Replete with magical powers, both Barauny and Elyos can hurl fire bolts and fireballs and wield laser-like fire swords, while the overmatched regular human army and others are confined to bullets and tanks.

The author, a ninth-grader writing in his second language, is to be commended for his ambition. His work shows promise, though it suffers from several issues. The story alternates from chapter to chapter between the first-person viewpoints of seven main characters: three humans, three Barauny, and one Elyos. The resultant episodic head-hopping, along with given names that don’t readily identify character races, leads to confusion. For example, Jamsin, Douglas and Karthus are human; Caesar, Vular and Ezreal are Barauny; and Lucifer is Elyos.

The tale often seems like an animated movie, with dramatic explosions that melt highways and send vehicles flying. Also, the dialogue is more suited to teenagers than adults; for example the supreme commander of earth’s armies wishes for “a cheeseburger with fries,” while recovering from a battle wound, and the phrase “you guys,” is frequently uttered by generals and commanders (“You guys will be in charge,” the Barauny emperor tells his generals).

Ultimately, such problems hamper reader enjoyment. While this novel is unlikely to appeal to adults, it may engage teenage readers attracted to the vivid action.