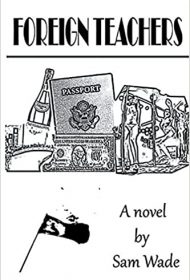 In Sam Wade’s novel, foreign teachers at a private school in China are required to support the school’s unethical practices in order to keep their jobs.

As the story begins, narrator Andy Dutton and several other foreign teachers gather for the new school year at the Luxury Gardens International School. The International Diploma Organization (IDO) is paying a visit, and administrators insist the school maintain “excellence in appearance.” Classroom appearance must be beyond reproach. Teachers failing the criterial will meet “serious consequences.”

But while the message is stern, the teachers respond privately with juvenile antics and jokes. They know that the school’s performance is based on lies. However, newcomer Glenn Whitman, reputed to be a graduate of Stanford, is intent on playing by the rules. Andy and his friends take Glenn under their wing, albeit not always with the best intent. They get him drunk and take him to a resort where women are the featured offering.

Despite partying and exotic vacations, Andy is a troubled man, one who has lied about his credentials. He knows for the sake of his own mental health that he should leave but resists giving up the lifestyle the position provides. Then an incident occurs regarding the administrations’ fraudulence, and soon other falsehoods are revealed.

This is an engaging story written in a straightforward manner that moves with momentum from the first page. The description is colorful and often sarcastic, such as “She was a bitter…divorcee with a face like a cracked oil painting.” While generally humorous, the high spirits belie a darker undercurrent created by life under a totalitarian regime and the compromise of the teachers’ own integrity.

The male perspective on women and sex may be a deal breaker for some readers, but otherwise, this tale is likely to appeal to those who enjoy a fast-moving story set in a foreign, occasionally seamy, locale.