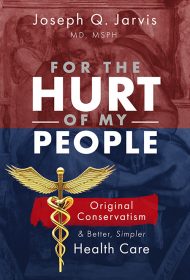 All Americans are health insecure, writes family practice physician, author and healthcare activist Joseph Q. Jarvis. Whether it’s for their own healthcare or that of family members, Americans are forced to deal with a profit-driven, fundamentally broken healthcare system.

Americans already tax themselves enough to deliver basic healthcare to all, the author notes, yet the most common cause of bankruptcy is illness or injury care, even for those with medical insurance. Furthermore, in the world’s most profitable healthcare system, many Americans are shut out of proven medical interventions; for example, insulin costs nine times more here than in the rest of the developed world—a possible cause of mortality in those who can’t afford it. Politicians on both sides of the aisle, he adds, have aligned themselves with the current system and its campaign-supporting lobbyists.

A conservative, the author considers The Affordable Care Act a taxpayer-supported system that primarily benefits insurers. But he also faults Republican-created Medicare Part D, which benefits the pharmaceuticals industry. Instead, he espouses government-funded, nonprofit, system-wide reform—a state-based health system with regional cooperative private-sector care delivery and public financing. He believes it’s the only viable approach that can attract conservatives and progressives alike.

The author’s persuasive argument is cogent and clear. Solid historical references support his perspective and give readers a better understanding of the current situations and possible solutions from a conservative perspective.

The narrative is also lightened with personal anecdotes, Biblical quotations (the book’s title comes from Jeremiah 8:20-22, “For the hurt of my poor people I am hurt”) and metaphorical details (e.g, citing the 1889 Johnstown, Pennsylvania, flood that killed thousands due to cost-saving dam maintenance).

Jarvis closes with a list of his own priorities to effect change, including his PAC, the American Health Security Project, which supports political candidates and state initiatives that push healthcare reform. It’s long overdue for a system, he writes, that “will be thrown on the trash heap of history.”