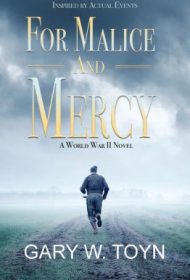 In Gary W. Toyn’s captivating WWII saga, a German American family is torn apart by their circumstances and forced to endure the devastating realities of a world in conflict.

German immigrants Karl and Marta Meyer have been living in the United States for 20 years. When war breaks out, their naturalized citizenship is revoked, they are designated “alien enemies” and detained at a Texas internment camp. Meanwhile, their U.S. born son and daughter, Hank and Ella, are left behind to handle the Utah farm. Ultimately, the parents are deported back to their war-ravaged homeland, and harshly imprisoned as spies. While Ella enrolls in nursing school to bring comfort to those injured, Hank joins the Air Force, but soon experiences an unfathomable betrayal and is taken as a prisoner of war.

While Toyn lightens the story’s weight of war with elements of friendship and romance, the primary focus is on characters caught between their once beloved homeland and their newly adopted country. Toyn artfully integrates multiple layers into this war-driven landscape. Readers are made keenly aware of an era of female pilots (WASPs) who qualified to ferry military planes, but undeservedly faced sabotage from their male counterparts. Tensions build in the casualties resulting from these tampered aircrafts, as well as from enemy bombardments and prisoners on edge from cruel guards and vile conditions.

Inspired by true events, the narrative benefits from extensive research. With a 1939-1945 timeframe, chapter headings easily identify time and place as actions move forward in a well-paced, chronological order. End chapter notes provide added historical context, although they sometimes lend a feeling of overload to the reading experience. Some proofreading is also necessary, as often sentences are missing words.

For those drawn to the intricacies of wartime drama, For Malice and Mercy delivers a well-crafted account of sacrifice and betrayal, triumph and forgiveness, all in the face of the human will to survive.