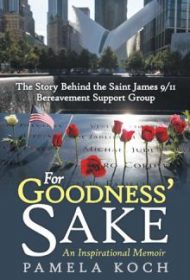 After the sudden and horrific losses of September 11, 2001, grief-stricken families struggled to find a path forward. Pamela Koch’s memoir, For Goodness’ Sake, is the story of her involvement in the Saint James 9/11 Bereavement Support Group, which met for two years at Saint James Catholic Church in Basking Ridge, New Jersey.

Koch is no stranger to grief, having experienced the deaths of several family members and friends, as well as surviving both breast cancer and leukemia. Koch was recovering from a mastectomy when the 9/11 attacks struck, but, having previously facilitated bereavement support groups, she felt called by God to use her knowledge, strong faith, and patriotism to help local families heal.

Koch’s book includes journal entries written after each meeting, which provide a feeling of immediacy, as if the reader attended each session. Woven through these entries are the recollections of volunteers as well as text of notable prayers and letters to the participants. Fittingly, the book closes with entries from participants revealing actions they have taken to keep the memories of their loved ones alive.

Koch’s religious beliefs are prominent throughout the narrative and may be challenging to those who don’t share her faith. Still, she uses relatable prose and a tone that’s direct and sincere. While stark and profound grief is palatable throughout, the author highlights goodness in all its forms and succeeds by leaving readers with a sense of hope rather than despair.

For Goodness’ Sake will resonate with all readers who believe in the goodness of humanity—whether touched by 9/11 or not,