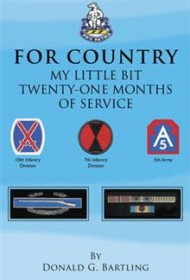 More than 60 years after the Korean War, author Donald G. Bartling looks back on the 10 months he spent serving his country, from September 1951 to June 1952.

His memoir, including photographs and copies of key documents, begins with the author’s enlistment and training as an Army infantryman and follows him as he’s shipped out to Korea and into action sooner than expected.

“It was a scary experience that I find difficult to describe,” he writes. “The tanks were firing the 50Cal machine guns and 75mm cannon almost continuously. The mortar rounds were falling quite close to us … there was utter chaos, as the noise of the battle also now included the voices of the wounded and the dying men.”

Bartling was hit by shrapnel and although the injury was minor, it was enough to qualify for a Purple Heart; however, he refused to accept the honor, knowing that others had given their lives for the prestigious award. That gesture says much about the author, a flinty, no-nonsense man who proudly proclaims strong religious convictions, high ethical standards and passionate patriotism.

But despite the scene above and his best efforts to pluck the highlights from his military experience, the book often bogs down in trivial details: for example, when Bartling writes of the difference in using “dimension lumber” versus logs when erecting a pre-fabricated building or of being awakened on a flight to see the sunset and then simply going back to sleep again. He also devotes nine detailed pages to a remarkably bland week of R & R leave in Japan. Meanwhile, other seemingly important events go mostly unexamined.

The author says he wrote this book to pay homage to soldiers who didn’t return from Korea. In this aim, he has succeeded. But while fellow veterans may relate to Bartling’s tales, general readers will find that the many mundane details overwhelm the bigger picture.