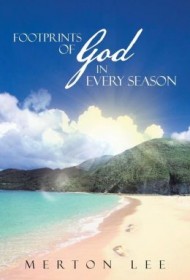 In Footprints of God in Every Season, author Merton Lee shares a message that he claims came straight from the mouth of God. While meditating, Lee engaged God in a question-and-answer session and learned 16 “truths” about mankind’s purpose, the afterlife, why a loving God allows suffering, and four “wisdom principles” for our daily lives.

This book is well-written technically. It’s free of typographical and grammatical errors. Nearly every page is sprinkled with picturesque or thought-provoking quotes from historical figures, including Helen Keller, Leonardo da Vinci, Albert Einstein, and Billy Graham. Lee weaves in his own philosophical tales and poetry along the way, making for a colorful read.

At first glance, the book’s genre is Christian apologetics, designed to answer age-old spiritual questions. But unlike most books trying to explain Christian doctrine in laymen’s terms, Lee adds twists that possibly create a new religion.

A student of philosophy, the Bible and “the wisdom literature of the major religions,” Lee’s doctrine also shows evidence of influence by “New Age and contemporary science literature.” He explains that all humans will eventually make it to heaven once they “become spiritually mature.” If we fail to manifest “divine moral goodness,” we will be reincarnated as another human. In essence, we get to hit the “re-do button.”

Lee’s mixing of religions creates confusion over his target audience. Serious students of the Bible will have problems with Lee’s lack of scriptural evidence to back what he sees as “God’s” claims; his new version of Christianity will seem like a fragrant tea bag steeped in the muddy waters of false religions. Conversely, ardent followers of other major religions are likely to have the same uncomfortable feelings.

However, searching souls who haven’t “found religion” or those seeking to marry New Age methods with the gospel might find rest in this comfortable armchair theodicy, in which we’re all partners with God, trying to bring about cosmic goodness.