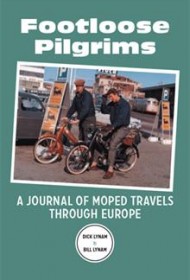 Based on the journals of two young travelers, Footloose Pilgrims may inspire you to get up off the couch in search of epic adventures.

In this book, brothers Dick and Bill Lynam share the story of nearly six months of travel they undertook in 1958 that carried them from their home in Puyallup, Washington, across the Atlantic Ocean and around Europe, where they toured on mopeds, explored sites of historical significance, and subsisted on less than $5 a day.

When the Lynam brothers set off on their journey, one was a recent college graduate and the other still an undergraduate. They’d read about the English Grand Tour tradition, in which young men of means traveled the European continent, and they liked the idea, but they called their Grand Tour more of a “modest tour.” The brothers explain that they thought of their journey as “something like the hajj–the pilgrimage a Muslim must make–to travel at least once in a lifetime to Mecca…” and that they “set out to buzz through Europe…and absorb as much of the scene as [they] could.”

Footloose Pilgrims catalogs the events of this fast-paced journey in journal format; those looking for reflection on the in-depth personal impact of the journey or the significance of various events will rarely find it here. And because Footloose Pilgrims is a journey taken in 1958, it won’t offer modern travelers practical how-to advice about touring Europe on a moped. The book is simply a breezy overview of past happenings with some historical detail interwoven.

As such, the tale of these two intrepid travelers will appeal to those looking for travel inspiration, rather than for a narrative centering on a personal journey that led to life epiphanies. Family members and friends of the Lynam brothers will also find their story enlightening.