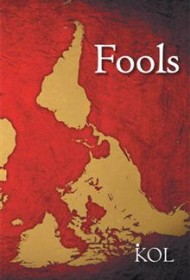 This literary tale pivots around the lives of a small group of wealthy teens, told from the perspective of James Christopher, an exceedingly bright, but disillusioned twin intent on quitting school, and newly in a relationship with Ana.

As they party, wreak havoc in class and while away their days, the characters banter about everything from philosophy to sex to Shakespeare with intelligence and a vocabulary that often far exceeds the average teen’s. But underlying all the witty repartee runs the question of trust and truth.

Early on, James, known to friends as Christopher, and Ana discuss the role those words will play in their relationship:

“I believe in truth and honesty, so if you hook up with someone, then tell me, and I’ll do the same,” he tells her.

“I just told you I don’t want you hooking up with other girls!” Ana responds.

“I mean … I won’t, but if it happens it happens. If you hook up with a guy when you’re drunk or whatever, just tell me. There’s a relief in acknowledging human nature. In terms of the species, we are carnal, fallible creatures.”

Thus, the author sets up the conundrum that will dog their relationship to the end as issues of fidelity between them arise.

This is an ambitious, intelligent novel in which trust and truth seem to become lost in the very quest for the same. The dialogue is smart and provocative; the characters, complex and flawed. However, the book’s strengths can also be its weaknesses. The clever banter, the use of metaphors and dream states can be hard to follow and confusing, while the footnotes (suggesting the influence of David Foster Wallace) are distracting. Musings, journal entries and notes in the Epilogue are at times insightful, other times baffling – likewise the inexplicable use of a series of numbers for chapter heads.

Nonetheless, this a first-rate effort, likely to be enjoyed by literary readers of all ages.