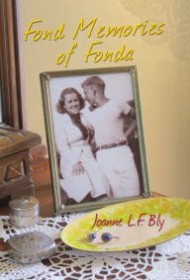 Years before the death of her mother, Fonda, author Joanne L.F. Bly gave her a blank journal in which to write about her life. From Fonda’s writings, Bly has fashioned a collection of anecdotes that chronicle her mother’s upbringing, as well as her own.

Born around 1919, Fonda grew up in a house her father built in Binghamton, New York, near Pennsylvania. The book begins when she was 15, shortly before she met her future husband, Bill Lincoln (a descendant of the 16th president), whom she married after high school. When World War II broke out, Bill joined the Army Air Corps while a pregnant Fonda taught product inspectors at a local weapons manufacturer.

Tragically, their firstborn didn’t survive. The couple later adopted a daughter, Joanne. Coinciding with the prosperity that followed the war, Joanne’s arrival spawns happy tales of her childhood spent with extended family and a little sister born to Fonda and Bill when Joanne was 7. The book ends with Joanne marrying a man who won the hearts of her and her family.

The chapters are self-contained memories that tend to ooze cheerfulness and end in prayers thanking God for his goodness, protection, etc. The result is an overly sweet, sentimental memoir that fails to reveal its subject in any depth. For example, a fascinating chapter on Fonda and Bill’s first-hand experience of the atom bomb test-detonation near the base in Alamogordo where they lived seems to foreshadow future physical or emotional problems for the pair. But after a couple of mentions in subsequent chapters, the issue is forgotten. Increasingly, the book covers Joanne’s adventures growing up, with Fonda, Bill and the seldom-seen younger sister in the background as supportive but secondary players.

While Bly’s family no doubt will treasure her account, it’s a bit saccharine for most tastes and not destined for a wider audience.