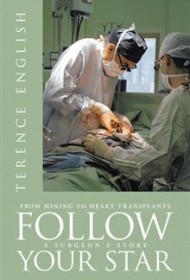 When Terence English arrived at Guy’s Hospital in London in 1955, he boasted an unusual background for a medical student. His undergraduate degree from Witwatersrand University in his native South Africa was in engineering, and he had spent a year working in a gold mine in Rhodesia. And that was before he headed for Canada to survey for uranium in the Yukon!

English retained his love of adventure throughout the distinguished career he describes in his informative memoir. But once he completed training, his formidable energies were mostly absorbed by the demands of cardiac surgery, entering a groundbreaking stage in the 1960s. English performed some of the earliest heart transplants in England, establishing a major center at Papworth Hospital near Cambridge. He vividly conveys the thrill of giving terminal heart disease patients a new chance at life–as well as the angst of inter-hospital politics and disagreements with colleagues. He rose to become President of the Royal College of Surgeons and then Master of St. Catherine’s College at Cambridge University, proving as able an administrator as he had been as a surgeon.

The reappearance of an old love in 1998 prompted him to a late-life divorce. (It’s quietly clear throughout the book that his first marriage was less than idyllic.) The memoir closes with English in happy semi-retirement, consulting on medical research and practices, while his second wife is principal of St. Hilda’s College, Oxford. The 80-year-old author states in closing that he continues to enjoy “long 4X4 adventure drives to remote parts of the world.”

English’s explication of the ins and outs of hospital and academic administration may not be to every reader’s taste, but his memoir evokes several high-powered workplaces in pleasingly substantive detail. In particular, his account of dramatic innovations in heart surgery will be exciting and inspiring to readers interested in the topic.