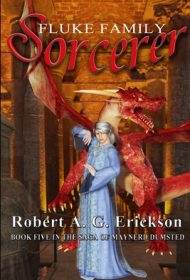 It doesn’t take long for Robert A.G. Erickson to strike up tones of lighthearted humor, intrigue and fantasy in Fluke Family Sorcerer, the fifth installment in his series chronicling the exploits of an unlikely hero.

Within the first chapters, readers familiar with the series’ previous books will rediscover the author’s imaginative flair for world-building, his knack for compelling action sequences and love of pithy dialogue. Most of all, they’ll recognize Sir Maynerd Dumsted, the bumbling, lovable anti-hero who anchors Erickson’s sprawling fantasy series. Once again, this knight who falls far short of the standard hero mold sets out on a dizzying array of adventures; once again, he runs into epic villains, impressive magic and romantic run-ins along the way.

In this installment, Maynerd battles a nefarious set of enemies known as the Demons of the Deep, seeks to unravel the mysteries of a sorcerer named Fingis, and must survive an epic threat from the Anointing, a spirit force that threatens the hapless knight and his friends. These challenges come with a quest to recover the lost family treasure that belongs to a “gorgeous, blond-haired woman” named Mithra, who serves as Maynerd’s new love interest.

As before, Erickson packs every page with intrigue and action. From Maynerd’s first conversations with his “ghost gnome” companion on board the ship Fyre Mayden to the final quest to discover the secret of the Anointing, Erickson is committed to his plot’s dynamism and characters.

That goal can sometimes feel weighed down, as the fifth book is built upon so much backstory that it’s easy even for veteran readers of the series to get a little lost. It takes some time to navigate the details and find fluency in this expansive world.

Happily, the author keeps things rolling with plenty of humor, banter and fun. Fans of the series will discover lots of new adventures to love, and newcomers will find charm in Erickson’s conversational, engaging style.