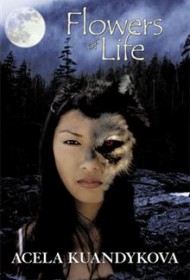 This slim story has the hallmarks of a fairy tale in which the protagonist must undergo transformations and trials in order to fulfill her destiny.

As the book begins, Aurelia, a beautiful princess, suffers when she is orphaned and her cruel uncle takes over the kingdom. Soon he is pressuring her to marry him. After a foreboding dream, she runs to a lake in a cursed forest. There, she meets a mysterious man and falls in love. When he is caught in her room, he is taken prisoner and her uncle plans to kill him.

Heartbroken, Aurelia seeks counsel from her only friend, Saint Father Rafael. Although she sees fear on his face when he tells her she must return to the forest, she feels she has no other option but to go there. In the forest, she meets a monster that informs her that the only way to save her true love is to find “flowers of life” and bring them back to him. When she agrees, he forces her to drink a potion, which turns her into a monster, and her travels begin.

The language is very simple, leading readers to believe the book might be directed at a young audience. But this isn’t really a story for young readers, and while it is formatted as if it were poetry, it doesn’t read as a poem, either.

While the story features the classic “Hero’s Journey” task for the protagonist that can be endemic of fairy tales, that task is never really fulfilled. Unless the author intended the “flowers of life” to be an opaque metaphor and not actual flowers, Aurelia never actually does what is asked of her; each of her detours ends nearly as quickly as it began, and the story concludes abruptly.

The overall result is neither poem nor fairy tale, but a confusing and, ultimately, unsatisfying experience for readers.