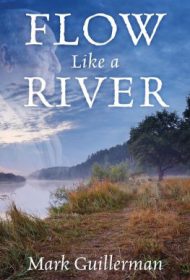 In Flow Like a River, Mark Guillerman provides a rare peek at a neglected area of regional U. S. history, while spinning a fast-moving Western yarn.

When most readers think of the “Roaring Twenties,” they picture jazz, flappers and big city glitz, but in rural areas like Gary, Texas, small town life continued much as it had before, with the exception of coping with the losses of WWI and the return of injured soldiers. In this novel, one of the soldiers killed was Joseph Cross, son of Grey Wolf, the last chief of the Chanas, a little-known tribe from the Texas Hill Country.

The story begins as Joseph’s beautiful red-headed widow Brenna arrives in Gary with her son Billy and the aging Grey Wolf, seeking a new life. Complications ensue when a tall stranger with piercing eyes, known only as “the Prince,” stops in Gary. In a past battle, Grey Wolf’s father killed the Prince’s grandfather, and the Prince has arrived with his henchmen to exact revenge on the chief’s family and the town of Gary.

Guillerman paints a vivid picture of a time when the Wild West was on its way out as the modern industrial age took over. Automobiles, telephones, and Thompson sub-machines have not quite overtaken thundering quarter horses, local gossip and six guns—but it won’t be long. Old-timers, the author writes, were nostalgic for “the sounds of the [stagecoach’s] spoked clacking against the brick pavers” —forgetting that they were the ones who built the train station that doomed the stagecoach lines.

The story’s underlying good nature makes for a satisfying and charming read. Billy and his friend Johnny display a quick-witted bravery that will appeal to a young adult audience, while the well-developed adult characters and intricate plot should also attract older readers.

There are novels hidden between the lines yet to be told, including the background of the local sheriff in his former life as a Texas Ranger and how Gary fares as the Great Depression looms. But, for now, Flow Like a River stands ably on its own.