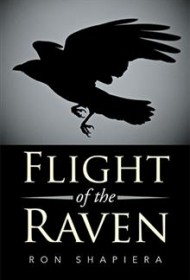 Flight of the Raven is the story of two communities, both struggling against the harsh conditions of their environment – each with a different approach and mindset.

The tale begins in the season of darkness in the frigid north where Tatchatka, a member of the Inuit people, and his family work at various tasks while contemplating their future. Daughter Kishiak worries about growing up and the expectation that it will soon be time for her to marry, while son Kupsik contemplates his first seal hunt. Everyone is eager for the return of the sun. Occasionally, they break into song or share laughter. Life is hard, but they are a happy, loving people.

Far away in Siberia in another village, life is also difficult, but the response is far different, with many of the men angry, drunk and bitter. One day a band of men see a ship come in loaded with fur pelts and decide to build a boat to seek out similar riches. But they are not mariners by nature and the boat building and consequent voyage is plagued with problems and even death. When they do finally reach land, they commit horrendous crimes against people of Tatchatka’s village for which they must ultimately pay the price.

Author Ron Shapiera has clearly studied the people he writes about, infusing the book with cultural color and references. It is a story of good vs. evil, with a sense of foreboding established early on. And while the moral of the story is not new, it is engaging as told from the perspective of people from this old and simple culture.

Admittedly, the attention to detail of everyday tasks can slow the plot (one passage, for example, describes characters raising the sail on a ship, down to minute details about how various ropes were fastened). But it also adds credibility to the author’s expertise. Overall, this is a story likely to be enjoyed by a wide audience.