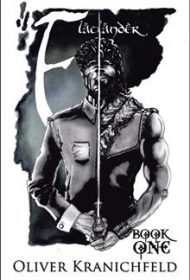 The story is set in a near-future Vermont, now an isolated, self-enclosed republic with its own king. As it begins, an amnesiac man awakens next to a river. When he is discovered by King Henry Cyrus, the free leader of the Second Republic of Vermont and the king’s companions, he is nicknamed Flatlander, a derogatory term for anyone who isn’t from Vermont.

Although the vast majority of the populace openly hates outsiders, the humble king decides to give the pitiful man a chance: If Flatlander completes ten quests, he will be rewarded with citizenship. Thus begins a series of epic—and, at times, highly humorous—adventures that includes saving a moose named Pete, killing a singing fish (named Fish) that has its own cult, stopping a drug epidemic, and even coming face-to-face with Champ, the legendary Lake Champlain Monster itself!

There is much to love here: The diverse cast of characters is brilliantly developed and authentic, the pacing brisk, the overall description vivid and fully immersive, and there’s an undeniable philosophical thread woven into the narrative tapestry. Flatlander is essentially an Everyman on a journey of self-discovery, struggling to find his identity in the roots of Vermont culture.

Additionally, the not-so-subtle references to the band Phish add another amusing layer to the narrative. (A character, for example, listens to one of his favorite old vinyl recordings: Fish: Unplugged in Burlington.)

Illustrated throughout by artist Sam Balling, this novel is, above all else, a literary love letter to the Green Mountain State: “This is a beautiful land,” writes the author. “… This whole place, in fact, is like something out of a dream.”

A storytelling tour de force, Flatlander should appeal to fantasy fans and anyone with ties to Vermont. Maple syrup and a sturdy pair of boots not included.