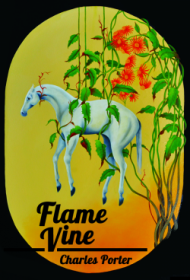 The fascinating and disturbing novels of South Florida writer Charles Porter reveal a mind in glorious torment, if such a state exists. By clinical definition, Porter is a schizophrenic—given to auditory hallucinations, paranoid terrors and crises of identity. Here, Porter follows his earlier success Shallcross with an equally accomplished prequel.

Flame Vine traces the harrowing (yet often joyful) life of his clearly autobiographical character Aubrey Shallcross from ages eight to 42, and in its often dream-driven pages we meet a man whose mind is in thrall to a pair of commanding voices he calls “slippers:” the good one, called “Triple Suiter” (or “Trip”) delivers Aubrey from self-destruction, while the evil “slipper” is a demon called “Slim Hand,” who wreaks havoc.

As he grows from a dark, Catholic-inflected childhood into manhood, Aubrey runs with entertaining Florida bar buddies called the Blue Goose Bunch (one’s Vietnam-baked; another huffs Freon), heads up a local band, falls for a difficult woman called Leda, sells cars, rides in rodeos and does lots of deep thinking. He sees his fevered brain not as damaged but as “a land of spirits.” “Triple Suiter” may have the most cogent explanation of his “host’s” mind, expressed in some of Porter’s best prose: “The brain is a pacific of prairies, forests, flats, oceans and sometimes storms. We slippers are there. When someone hears us and tells a doctor, the doctor calls it schizophrenia.”

At times, Porter’s writing can be an odd mashup of his stated influences—Rimbaud, Jules Verne, William Burroughs, Henry Miller, Cervantes. Sample: “And I wonder if I was deep into fixing weed eaters, like Punky, would I be picking my nose all the time about this ground-glass existential in my stomach?”

Small complaint. In the literature of madness—or what poses as madness—Flame Vine stands tall. Good news: Its brave and talented author promises a sequel to Shallcross to complete his mind-boggling trilogy.