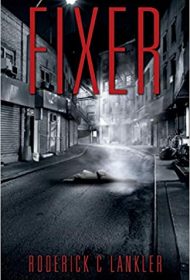 In Roderick C. Lankler’s crime thriller Fixer, someone is rigging juries, and it will take Assistant District Attorney for New York County Ian MacDonald, a retiring judge, and the NYPD Homicide Unit to stop them.

When Ian MacDonald rests the state’s case against Gino Conti, who is on trial for the rape and murder of a young Manhattanite named Mary Rusk, he feels sure a guilty verdict is imminent. He’s blindsided when the jury deadlocks, resulting in a mistrial. Ian learns that juror number 11 was the lone holdout and refused to provide his reasoning. Ian suspects that Number 11 (as he comes to be called) may have been paid off.

Ian knows he can’t take his concerns to his newly appointed district attorney boss, a would-be politico obsessed with press coverage who can’t be trusted to keep a classified investigation under wraps, so he enlists the help of his assistant, the judge, and the Homicide Unit in a covert operation to stop the jury fixer before Conti is re-tried. The investigation yields surprising and disturbing results.

Lankler crafts an intricate story heavy on details and mercifully light on legalese. Ian is likeable and noble, the undercover operation well-choreographed, albeit dizzying. There’s also a major break in a years-old unsolved murder case, and a romantic element as Ian falls for Mary Rusk’s sister, Adele.

It’s a challenge, though, to keep all the intersecting plotlines and a large cast of characters straight, particularly when presented with untagged dialogue. Compounding the confusion, Lankler alternates sporadically between characters’ first and last names.

While Ian and Adele’s love story adds some suspense to the mix (they must keep their love a secret until Ian is no longer prosecuting Adele’s sister’s murderer), it’s unfortunately relegated to a minor subplot.

Despite its flaws, Fixer is intriguing enough to persuade readers to persevere through its many twists and turns, ultimately paying off in an ending that leaves no loose ends untied.