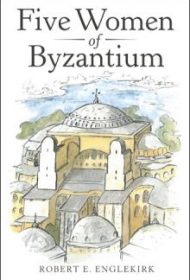 Robert E. Englekirk’s Five Women of Byzantium is a sweeping narrative history of the Byzantine Empire from 429 to 1054.

The story is told by a long succession of different narrators, speaking in first person for a short chapter or two. Each recalls historical events, either in a monologue or conversation. Englekirk’s characters are generally the leading men and women of each time-period, or historians recording recently occurred events.

The story begins in Constantinople in 450 as Empress Pulcheria wonders how history will remember her. It then runs through the Byzantine Empire era with tales of battles, politics and family feuding, including the rise of Empress Theodora from actress and prostitute and the story of the murderous tyrant, Basil I. The book concludes with the disintegration of the Empire following the death of Basil II.

Each section is headed with a speaker’s name, and the breadth of characters is impressive. But the latter also creates difficulties: The speakers lack distinctive voices, making it hard to distinguish between them.

Additionally, events are referenced with little context, description, or emotion. For example, Constans II says without preamble or explanation, “In 660 I had my brother Theodosius killed.” In another passage, Empress Theodora declares of her husband, “he would never admit to his cowardice during the Nika riots. Were it not for me, we would not be wearing the purple.” Readers unfamiliar with these riots will be confused. Furthermore, over-reliance on dialogue to rehash past events robs the story of dramatic action.

Although the author’s depth of knowledge is impressive, the story is ultimately too complex to engage laymen, yet likely too superficial to satisfy experts of the period.