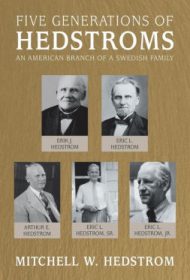 Mitchell W. Hedstrom’s Five Generations of Hedstroms recounts his family’s history, from their roots in Sweden to their eventual establishment in Buffalo, New York, where they became prominent in civic and business circles.

Hedstrom has done meticulous research, drawing on a bounty of sources: family reminiscences, diaries, obituaries, news articles, magazines, family business records, title searches and more. They are often telling in their matter-of-factness. For example, in a letter Erik wrote to his brother in Stockholm, he describes starting a farm in Illinois: “Here we bought 40 acres of the best land for $1.50 per acre…I bought a pair of oxen for $30. I have already made several trips to the forest with them and brought home nine loads of hay.” There are also family photos and maps that nicely complement his text.

Hedstrom’s narrative is workmanlike and straightforward. He doesn’t try to be colorful, but instead focuses on facts, right down to the addresses where various family members lived. There are a few small factual errors, such as the year Illinois became a state, and the month of the attack on Pearl Harbor. Those, though, have no real bearing on the book’s focus.

The author notes that Five Generations will most interest his family members, living and future. This is likely true. Still, the author’s slim book skillfully demonstrates how to create a loving keepsake from family records and reminiscences.