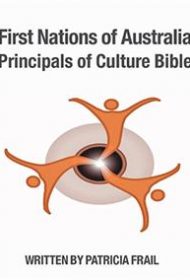 In this brief, oversized booklet, aboriginal author Patricia Frail attempts to explain some of the culture, customs and spiritual values of her own people and homelands in the Australian state of New South Wales.

Frail notes on the back book cover that the book aims to offer “some of the main lores of the First Nations culture.” It’s a worthwhile endeavour, given that the tribal traditions and strong spiritual beliefs of indigenous populations around the world often puzzle outsiders and may seem strange in today’s more secular age.

However, for a number of reasons, Frail’s efforts come up short. The booklet lacks any clear narrative or direction, while the contents are largely fragmented and presented without much explanation or analysis.

Frail randomly offers readers a prayer and a song, photographs and a map, plus numerous blank pages for them to record their own tribal and family stories, draw a tribal map, list tribal words and their meanings, and create a family tree. In the few pages where Frail contributes her own thoughts and observations, she mostly does so using lists and bullet points rather than following a cohesive narrative. Many of these lists lack focus. For example, under the heading “Totems,” initial items advise readers to learn about their tribe/clan, family, and personal totems. But the items that follow go on to discuss, among other things, tribal customs and rules (such as “No copulating with children,” and “After there has been a death, have a smoking ceremony”).

Frail does present some interesting insights on specific cultural issues, but the lack of context leaves readers wishing for much more. While this book may help family members gain a better understanding of their cultural and spiritual heritage, the author’s larger aim that this slim guide might also enlighten a wider audience seems far too ambitious in light of its contents.