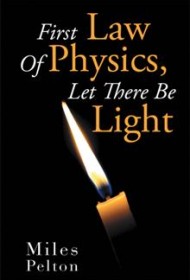 Does science need to be at odds with religion? Is a belief in divinely inspired creation antagonistic to reason? No, says Miles Pelton in his First Law of Physics, Let There Be Light. As Pelton notes, animosities from proponents on both sides of the fence prevent many of us from seeing the whole picture: “The feuding, biased, and flawed beliefs of both physics and religious teachers make it difficult for maturing minds…to develop sound beliefs.”

In his book, the author, a retired engineer, examines a number of scientific topics — including the composition of photons, neutrinos, atomic theory, the principles of heat and energy, and gravity — in an attempt to pull back the curtain that prevents God from being fully seen in the physics of everyday life.

Though not a scientist, Pelton exhibits an understanding of a number of scientific principles. Chapters seven and nine are fascinating accounts of light and energy, accompanied by interesting photographs depicting how a lit candle in sunlight casts no shadow (an observation that causes a spiritual epiphany in the author). Yet, overall, one wishes that the author had drawn more conclusive connections between science and faith. In many ways, the book feels more like an introduction to advanced science than it does an examination of two worldviews.

The author’s biggest challenge, however, is in conveying his thoughts in a manner that is easily understandable. Though Pelton’s ideas are bubbling over, his prose can be difficult to follow. An example from page 37: “Following acknowledgment that the behavior of matter is powered by energy implanted on and made an inherent property of each elementary particles of which matter is made…” This single sentence continues for another four lines. Science can be difficult for many to grasp and run-ons like this one can cause even more confusion.

Overall, Pelton’s heart is in the right place; he wants scientists to reevaluate the materialism that permeates so much of our understanding of the world today. But his book needs more refining before it can be of service in the way the author wants it to be.