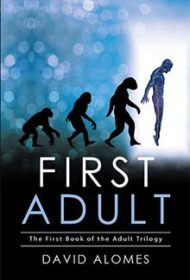 First Adult is a promisingly imaginative science-fiction yarn with a unique theme: As technology becomes increasingly advanced, sentient beings across the galaxy continue to act like children. Self-interest, short-sightedness and violence take a toll on civilizations. But powerful, wise beings, known as “Adults,” assume the task of raising their planet up from its baser instincts.

Ikara, an Adult from the Eshari race on the planet Daen, goes to Earth to find a human who has the makings of an Adult. He finds and apports Samuel into his space ship and begins Samuel’s training:  a mind-transfer of the story of Doneel, the First Adult, a story Samuel will experience as if he were in it.

Doneel’s travails metaphorically describe today’s political climate. One warring side Nu, has great technology, while The Righteous is characterized by religious fanaticism. Both are “so entrenched in their positions that even the concept of peace” was unthinkable. A third group, The ‘Tweeners, is caught in the middle. As Doneel slowly gains wisdom and magical powers, so does Samuel. If Samuel achieves Adulthood, he will become Earth’s all-powerful parent, just like Doneel on Daen.

This is an intriguing conceit. Unfortunately, the tale does not completely rise to its promise. The story is really about Doneel: his successes and failures. Samuel’s character is underdeveloped, and he becomes more a sidebar than a main character. Additionally, the interwoven story of the struggles of SharTree, a navigator-trainee on the ship that carries Ikara to Earth, belies the author’s assertion that “life for the Eshari was truly a paradise.” While providing a segue to a sequel, this clouds the novel’s focus.

Technical issues, including too much exposition, overuse of the conjunction “and,” and the occasional awkward sentence, also dilute the book’s impact to varying degrees.

Nonetheless, the plot is compelling, and those who can overlook the technical faults will find a largely engaging story.