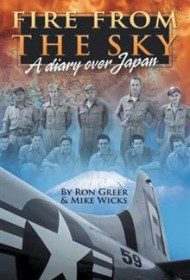 A valuable contribution to the history of WWII, this in-depth memoir chronicles the air war over Japan. More than a narrative of one man’s harrowing experiences during his 28 bombing missions on a B29 Superfortress, it contains a wealth of essential information about the military operation that decimated Japan’s war arsenal and defenses.

Staff Sergeant Herbert Greer was a 23-year-old, newly married, “frightened boy” from a little town in the Pacific Northwest when he was stationed on Guam. His diary of his service as the radio operator on bombing flights is precisely detailed, also augmented and enriched by his recollections six decades later, as spoken to his son, Ron Greer. Co-author Mike Wicks shows a fine editorial hand in stitching those strands together to provide background to the wartime events that Greer witnessed.

Military buffs will be interested in the development of Boeing’s fabled aircraft, since its enhanced ability in range and bomb capacity made a crucial difference in the war’s course. Even general readers will be impressed by the levels of training the flight crew of the City of Monroe Superfortress maintained.

The crew endured 14-hour flights in excruciatingly tight quarters, often encountering severe weather fronts, before reaching their destination. Once they arrived, they were in extreme peril from flak, fighter and suicide planes, and firestorms that arose and engulfed the plane from the havoc they had created below. Greer recalls “the remarkable stench… the smell of burning flesh” that rose and permeated the plane after a bombing. Equally horrifying was the Japanese military’s practice of summarily beheading captured Allied soldiers, a fact that haunted airmen who faced the option of parachuting from a disabled aircraft.

Greer’s recollections and insights about the members of his squadron and their tight camaraderie add considerable dramatic suspense to this compelling narrative. The book will hold great appeal for WWII veterans and their descendants, as well as general readers with an interest in this fearsome war.

BlueInk Heads-Up: Those interested in military history of any epoch will also find much to intrigue them here, especially since the text includes black and white archival photos and a bibliography of 47 web sites.