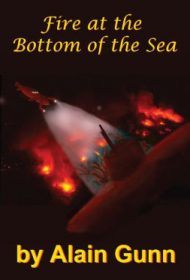 With Fire at the Bottom of the Sea, Alain Gunn delivers a rarity among naval thrillers: a story whose villain is the reality of physics rather than a foreign entity.

Commander Daniel Farriott takes his crew on a training run in the billion-dollar nuclear submarine John P. Craven (JPC) in the Pacific Ocean near Hawaii. Underwater, it catches on flotsam left over from an earlier Japanese tsunami and loses power. The junk threatens to drag the sub to the ocean floor 9,000 feet below, where pressure would crush the hull and kill everyone aboard.

Although Farriott radios for assistance, there’s only so much a rescue ship can do. Also, he must be careful lest Russian or Chinese vessels in the area intercept his signals and learn about American technology. Luckily, JPC finds its way to shallower water—unluckily, now it sits atop an active volcano that’s oozing hot lava.

Gunn relentlessly builds tension as the JPC sits in superheated water and the volcano gets angrier by the minute. Farriott must avoid lava bombs, prevent explosions, be careful not to spark a tsunami-producing landslide, and of course save the JPC and its crew. Is that too much to ask? Meanwhile, back on land, Farriott’s wife is cheating on him, although she at least feels guilty about it.

The author blends meticulous research and skillful writing into every aspect of this yarn, even the undersea life of tubeworms and six-gilled sharks. Dialogue is crisp, the plot taut, and the action tense.

Admittedly, the unfaithful spouse thread is unnecessary, especially as her fate is not linked to her misbehavior. And the epilogue is ho-hum. Additionally, the formatting is odd, with the first letter in every sentence bolded, as well as the first letter of proper nouns. Nonetheless, the bulk of the book is a winner with an unexpected and just a bit over-the-top ending.

Overall, Gunn has delivered an exciting nautical thriller—one that deserves a wide audience.