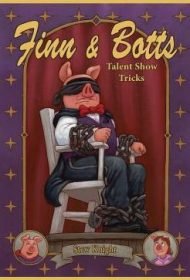 Best friends Finn and Botts are the stars of this middle grade series, whose characters are all anthropomorphic pigs (this doesn’t directly impact the story but is captured in the illustrations). In Talent Show Tricks, Finn has decided to take lessons at a local magic school to prepare for his school’s annual talent show. But even after three months of classes, Finn’s nerves get the better of him during a showcase at the magic school. The next day, still smarting from his flop, he feels pressured to cave to the class bully and pull a prank at school.

Caught for the prank and ashamed at who he’s becoming, Finn learns to trust himself and realizes he should care less about what others think. Then, at the last minute before the school talent show, this same bully tells Finn he’s feeling sick and asks him to stand in for him. More confident in his own skills and feeling empathetic, Finn agrees — only to  later learn that the bully had a nefarious motive for his request.

Young readers will easily identify with Finn, who has the courage to try new things but fears doing them badly in front of others. His character growth is compelling

and gives readers a relatable role model. Additionally, the challenges he faces feel familiar and realistic without being overdone.

Some portions of the story drag a little, such as unnecessary scenes during the showcase and talent show. Overall, though, the book keeps a pleasant pace peppered with recurring jokes, including Botts’ deep love of donuts and another character’s ability to mimic voices. Black-and-white illustrations help bring the story more fully alive.

Enjoyable and with a neatly packaged lesson, Finn & Botts: Talent Show Tricks is a polished story children are sure to enjoy.