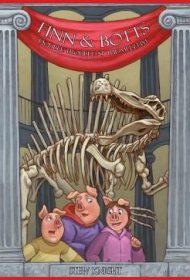 In Stew Knight’s delightful middle-grade book, best friends Finn and Botts solve a mystery during their school field trip to a museum.

Finn and Botts (depicted as pigs in the illustrations, although the text never refers to this) are invited, along with school classmates, to spend the night at the city museum. Before the trip, they learn that some dinosaur bones have gone missing from the institution, and from the moment they arrive, strange things begin happening. For example, the museum director notices that a crate containing dinosaur bones has been mysteriously moved from an exhibit to the museums’ back doors. When she asks Finn and Botts to help a museum staff member return the crate to the dinosaur gallery, the two notice occasional trails of dirt and rocks—some that sparkle—on the floor.

Later, Finn discovers the crate has moved again and is now hidden behind a plant in the gem exhibit. Soon, the crate has disappeared altogether, and he and Botts see the class’s troublemaking twins running out of the gallery. As Finn and Botts follow the twins, they are led to a hidden room where they solve the mystery. More twists, laughs, and an unpredictable ending follow.

Knight’s story features a cast of well-honed, original characters so skillfully crafted and such fun that readers won’t even realize they’re turning pages. Among the funniest scenes: when Finn and Botts pose as cavemen in an exhibit; and when, after learning the sleepover is part of a fundraiser to save the dinosaurs, Finn’s sister quips: “…[S]ave dinosaurs?…Everyone knows they are extinct!”

The illustrations are amusing and well rendered, and fun dinosaur facts are sprinkled throughout the narrative. Additionally, at one point, the class is given a puzzle to solve while viewing the dinosaur exhibits; readers will be delighted to discover the puzzle at book’s end.

With its sweet, silly kid-humor, appealing characters, and scary-cool facts, readers will devour this whole.