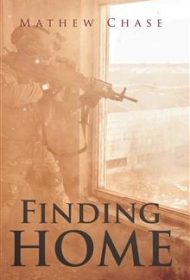 Success often shows itself in flash and grandeur. But it can also arrive quietly, in the simple but heroic act of putting one foot in front of another and finding the will to choose a better life.

Author Mathew Chase has penned a remarkable, clear-eyed personal journey in Finding Home, which tells his story of moving from a childhood stained with poverty and abuse in a drugs-riddled Philadelphia neighborhood to what felt like the only path out: enlisting in the Army and eventually deploying to Iraq.

“The house was different after that,” he writes of the death of his grandfather when he was a child. “Without Pop-Pop there to keep them away, the monsters of Kensington Avenue crawled inside, getting in between the window bars and slithering into our lives.” Soon after, his father begins dealing drugs and his mother becomes an addict. He enlists to escape the damaging cycle. During his service, he felt a creeping dread as he embarked on missions, haunted by the growing number of fellow soldiers being harmed by improvised explosive devices. He began to feel anger, as well as to question why and who he was fighting.

What lifts this story from maudlin to mesmerizing is Chase’s refusal to be self-indulgent. There’s no doubt he suffered, yet he eschews melodrama and instead tells a straightforward tale that shows great self-awareness. The writing, at times lyrical, lends a sense of urgency and authenticity.

There’s a slightly disjointed feel between the two parts of his life. More connection in the second half to what has come before would help readers see parallels between the brutality of war, and his fear, doubt, and ultimate determination to survive, with the similar elements of his childhood. Perhaps he feels it is to be assumed, but a more overt treatment would be helpful.

Nonetheless, this is a strong—and at times breathtaking—debut from a writer who should be encouraged to keep telling stories.