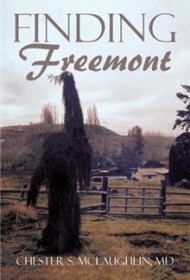 Finding Freemont is billed as a novel about finding a Bigfoot-type creature. Unfortunately, poor editing and a difficult-to-follow and unfocused narrative greatly hamper its success.

Although the back cover copy and title lead potential readers to believe that the story will prominently feature and explore the Bigfoot myth (Freemont is a “tamed” Sasquatch), that, in fact, has little to do with the main plot thread. Instead, the book mostly chronicles the life of Wallace Myers, a military veteran who relocates to the state of Washington after his aunt bequeaths him some property. (He’s also referred to as “Wallace Adams” on the back cover and “Wallace Meyers” later in the book.) Although his aunt Adele had seen Sasquatch and even temporarily raised Freemont (described in the novel as “her pet”), the vast majority of the novel is focused on Wallace’s incestuous love affair with Adele and the subsequent rape of his lover Lannie.

The Sasquatch thread isn’t really explored until the novel is almost over: beginning on page 389 of a 501-page novel. The storyline isn’t linear and numerous unnecessary tangents (such as the backstory involving the protagonist’s father) not only ruin whatever momentum the novel has but also give it an aimless, lethargic quality.

Additionally, the author spends far too much time incorporating inessential historical infodumps and medical details into the story: for example, four pages describing repairing a broken forearm and 10 pages detailing the gruesome rape (“…the raping had torn her vaginal mucosal lining up to the cervix with partial separation of the cervical-supporting tissues at the end of the vagina.”) These also negatively affect the momentum and slow the pacing down to a crawl, as do the vast amount of grammatical errors throughout.

The potential was certainly there for an intriguing examination of the intergenerational interaction between Sasquatch and a small group of Washingtonians but, sadly, a convoluted and error-filled storyline make this novel a highly challenging read.