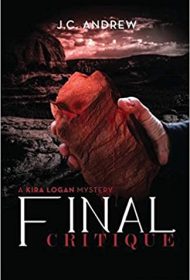 In J.C. Andrew’s mystery Final Critique, art instructor Kira Logan arrives to teach a workshop, unaware “that her week of teaching plein-air painting would include an act of revenge and an undeserved death.”

Readers learn that when one of Kira’s students, Jason, was a teenager, he killed a person and crippled another while driving drunk, eventually serving a three-year prison sentence. Unknown to Kira, half her class has personal connections to Jason, including: Luke, whose brother, Charlie, was crippled in the accident; Luke’s friend Kevin; Warren, whose brother Robert was killed; and Marci, Robert’s girlfriend’s sister. Helen, who demands that Kira eject Jason from the class, is connected only by her self-righteous anger that Jason didn’t serve a longer prison term.

During the week, in addition to Helen’s and Marci’s vicious gossip, Jason is the victim of practical jokes, including two that could have turned lethal, for others as well as Jason. But it isn’t until one character is attacked that readers learn the extent to which someone will go for revenge.

The novel is told almost entirely by narrative. The occasional dialogue is stilted, with characters using formal words such as “besmirch” and “soliloquize.” For much of the book, little happens other than Kira visiting each student as he or she works and going over their efforts in the evening critique. Overall, she does very little sleuthing.

These many issues make for an unrewarding read overall. Final Critique requires revision before it is likely to attract an enthusiastic readership.