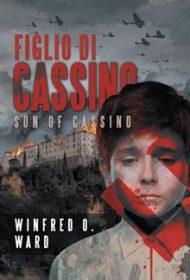 In his historical novel, Winfred O. Ward tells a war story from the perspective of a refugee constantly on the run from mayhem and death, scrounging for food and shelter.

Figlio di Cassino: Son of Cassio follows Stefano Capaldi, a peasant child living in the shadow of Monte Cassino, scene of Italy’s bloodiest WWII battle. Although orphaned before the war, he and his older sister Marta manage to scrape out a living on what is left of their family’s farm. Then, as Italian support for the war wanes, Hitler sends his German soldiers into the fight and life changes dramatically, and for the worse, for the two.

They are dislodged from their home along with their extended family. Shelled by both sides, they shuttle back and forth in the darkness and cold to avoid battlefields, hide in forests and forage for food. Stefano scouts the enemy’s fortifications in the trenches of Monte Cassino, is captured as a spy by the Germans, escapes and practically has to beg Allied officers to accept the intelligence he gathered.

This is a story of survival in a world gone mad, told with sensitivity and enough detail to bring it alive. The author’s accounts of hunger, exhaustion, fear and anger make it easy for readers to relate to the families fleeing the next crisis.

But following Stefano through an entire war and its aftermath is a lot to cover in 241 pages. In this case, the story moves too quickly, sometimes grazing over important scenes and information. The novel ends slowly, letting down readers expecting a dramatic climax. Perhaps this is as it should be, however, as the refugees’ reality is the slow, laborious reassembling of their lives.

Avid readers of WWII history, which often is told through the eyes of combatants, might appreciate learning more about the refugees. While they mostly show up in newsreels as nameless, dispirited locals trudging along a road, this novel gives them their due.