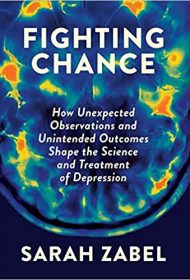 The author’s desire to help a friend first sparked her interest in depression studies, but she grew fascinated with the subject, wanting to fully answer: “What is depression?” And: “How do we predict it, prevent it, and cure it?” Her curiosity is infectious as she skillfully interweaves the physiological, environmental, genetic, and chemical complexities of depression.

Her book covers past and more recent breakthroughs, focusing on: traditional therapies and interventions; possible causes of depression; suicide (“I had come to think of suicide as a final stage of depression,” writes Zabel, “but it isn’t. Suicide has its own neurobiology and risk factors.”); and effective noninvasive and invasive therapies, including more recent complexes of therapies. It also offers a helpful glossary and extensive bibliography.

Throughout, Zabel intertwines stories of research scientists and people suffering from depression: for example, Theresa, whose lifelong, incapacitating depression—caused by neurotransmission issues and entirely out of her hands—went long undiagnosed. But Theresa courageously rallied, finding doctors who finally unlocked the causes and designed therapies that gave her a full life for the first time.

The main narrative is divided into four parts. While they are well-organized and build on each other, the focus of each section isn’t always immediately clear. For example, the title of Part One, “The Glass Box,” isn’t explained, and the section’s thematic emphasis isn’t discernable until three pages into the first chapter.

The text also doesn’t shy away from jargon and scientific terminology (e.g., “…animal studies indicate that [retinoids] are required for synaptic plasticity in the adult hippocampus…where they regulate neurogenesis and neurite growth”). Yet the author manages to make it all clear and understandable.

Overall, this is a well-researched, engagingly written and informative tome that will interest anyone seeking a better understanding of depression.