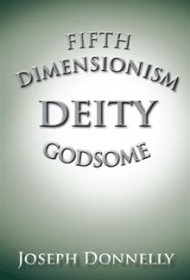 In this sequel to his hefty 2011 treatise The Fifth Dimension, Dubliner Joseph Donnelly reiterates and seeks to refine his optimistic theories on politics, society and the unity of the human species under God.

Donnelly’s writing, however, remains largely incoherent, a fact he addresses on page 3: “I can readily accept the poor level of grammatical delivery,” he writes, noting that he nonetheless feels “open and content” with the book’s contents. “The work by sentiment and to the true value of living philosophy, will forever carry its own weight for use in the harmonious aims of all past and present political systems, standards, scientific procrastinations, ideas and or ideals.”

Give the author credit for trying to be lucid. A careful reading of these 190 pages yields some core beliefs embedded in the linguistic muddle. First, earthlings are all one species, a fact that must supersede our divisive cultural or nationalist loyalties. Second, to be “civilised,” we must be what Donnelly calls “Godsome”: faithful to monotheism in one form or another. Third, we must embrace the “double-helix” of “Fifth Dimensionism,” a vague confluence of history and religion that seeks transcendence.

Mostly, though, the book is confounding. Here is Donnelly’s summary of the book’s titular notion: “Accepting blame as we should tribally, racially, nationally or internationally, is ours at hand. But always remembering from coating those slotted differences with the religious attitude of being Godsome. Also enters us into a bigger arena. Whereby we; the only species ever in the entire universe, have called to the possibility of the future belonging to us!”

Donnelly is obviously man of great faith, and that is his strength. His narrative, however, is largely indecipherable and will mostly serve to frustrate readers who attempt to decode his thoughts.