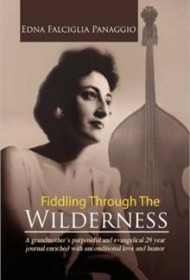 Edna Falciglia Panaggio’s memoir begins in 1981, at the time of her divorce, and weaves the telling of “how God faithfully comes into one’s life…and uses us to His glory” into a record of her later years. Now in her 80s, she reminisces about how God has used her, an actress by trade, in the lives of others.

Panaggio began her acting career as a young adult, appearing in television and film, eventually teaching modeling and acting workshops. As an extra on movie sets, she worked with Gregory Peck (Other People’s Money) and Steven Spielberg (Amistad), among others. On the community stage, the author was cast as Sister Berthe in Sound of Music, Vera Charles in Mame, and she especially enjoyed playing Golde and Yente in Fiddler on the the Roof.

After her 29-year marriage ended in divorce, Panaggio “took it upon myself to explore…where I found a peace beyond all understanding.” This born-again faith changed her life and is the basis of the book.

Believing deeply in God’s personal guidance, Panaggio writes: “The Lord will show me what I must do to comfort his children’s hearts.” Short vignettes of befriending those in need fill the volume, and the author’s compassion is evident.

The book, however, is flawed in several ways. Although the cover picture and title allude to a story about a woman and her violin, this is something never mentioned. And while the subtitle suggests a chronological format, the content is delivered in a random fashion, with many paragraphs lacking continuity. Photographs without captions further distract the reader.

While the book offers a strong theme of a divorced woman of faith navigating the entertainment industry, the lack of a clear focus ultimately hampers the author’s ability to deliver a compelling story of God’s personal involvement in her life.