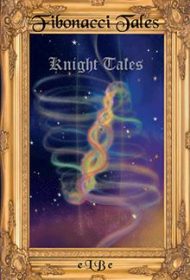 Fibonacci Tales: Knight Tales is one of a series of story collections by eLBe using the Fibonacci Sequence, a 13th century mathematical formula in which each succeeding number is derived by adding the previous two:  1, 2, 3, 5, 8, 13, 21, 34, and so on.  This book contains 11 stories that increase in length throughout the collection, with the pages of each corresponding to the Fibonacci sequence; thus, the final tale begins on page 144.

The stories (or chapters) in this collection take place in an alternate reality, where the world has fallen on hard times and vampires and other evil beings are real. The pieces are somewhat related, with characters occasionally overlapping, but not always.

One tale reveals how vampires came to be; another centers on a secret government division meant to wipe out vampires. In several tales, a family in western Kansas is on the brink of ruin and starvation in prairies that have been devastated by climate change and overpopulation. The family is saved when the husband and father shows up with a magic bag that contains all they need.

The final, novella-length tale, incorporates elements from the real world and its history. A former slave from the carpetbagger period in Mississippi, who happens to be a vampire, kidnaps a female slave to use as nourishment and steals his master’s Rolls Royce. They end up in an Old West town in Kansas, where Jacob, one of the locals, channels Michael the Archangel, and the thief is forced to ride a dragon through the first six days of Creation (as told in Genesis).

Because the stories don’t follow a chronological order and settings, times and characters shift from one tale to the next, it takes significant effort to keep track of the narrative and make the connections to understand what’s happening. It’s never clear whether the book is intended to be read as a novel or a story collection. And while the Fibonacci conceit is intriguing, it’s not apparent what is gained, in a literary sense, by the concept.

Nonetheless, eLBe is a master wordsmith.  His prose is literate and carefully constructed, and the vocabulary and style correlate well. In the final analysis, it’s up to readers to decide whether Fibonacci Tales: Knight Tales is a successful literary experiment, or a numbers game that doesn’t add up.

BlueInk Heads-Up:  According to the author’s Amazon page, the book is intended to be read in conjunction with music “callouts” for best understanding and enjoyment. The soundtrack was not available for this review.