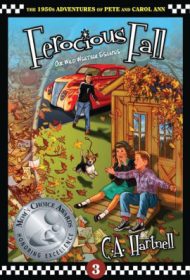 Carol Ann and Pete are neighbors, classmates and traveling buddies when they take school or family field trips. One day Carol Ann notes a suspicious black truck on her street. Meanwhile, a group of three boys—Rex, Neil, and Stu—have been harassing Pete. When a newspaper article mentions “three youths who were arrested for stealing,” Pete and Carol Ann wonder: could these boys be the thieves? Carol Ann always keeps a notebook of Bible verses in her pocket for comfort and guidance. Now, she’s adding clues to it.

Pete and Carol Ann’s suspicions grow when Rex speeds off as a police car drives near him. Complicating matters, some industrial hooks have been reported stolen, and Carol Ann begins to suspect Pete’s older brother Hawk when she finds a hook near Hawk’s car.

Throughout, many dramatic weather-related scenes are engaging: Carol Ann and Pete get caught in a dust devil, a flash flood, and a hail storm, and Carol Ann nearly gets struck by lightning.

Young readers may find the ‘50s setting— enhanced with excellent illustrations — intriguing, but the story suffers from some flaws. While the initial theft plots are interesting, readers are apt to grow restless as the story shifts focus to Carol and Pete’s chapter-long activities, including apple picking, canyon hiking, visiting an alligator farm, and more. Readers’ patience is further tested by abundant minutia. And when Carol Ann and Pete discuss their field trips, they sound like historians or well-spoken guides, not children. (“These are vacation cabins built in the early 1900s during the Great Hiking Era of 1895 to 1938. During that time, people built cabins here on the trail that Wilbur Sturtevant carved through the canyon.”)

The back of the book contains photographs of the real Carol Ann and her family, a list of resources related to the topics introduced, a glossary of ‘50s lingo (“BREAD: money”). It also includes a recipe, cost list of items from the ‘50s, some word games and facts about the ‘50s (while this is a good idea, facts such as “Students celebrated Columbus Day on October 12, 1955” are unlikely to excite the book’s target audience).

Overall, the book’s lack of focus and abundant trivial detail impede its success. Still, Hartnell has created a truly winning friendship between sweet, innocent Carol Ann and kind, plucky Pete and offers a Christian element that some young readers might appreciate.