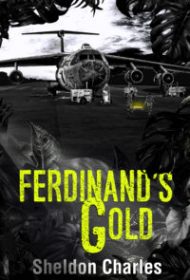 A military veteran and prolific author of military fiction, Sheldon Charles delivers a rousing thriller about a quartet of ne’er do wells who use their roles in the U.S. Air Force to plan a lucrative heist.

Set in mid-1980s Guam, the plot revolves around the imminent overthrow of President Ferdinand Marcos, the corrupt, dictatorial leader of the nearby Philippines. The leader of our anti-heroes is air cargo specialist Dexter “Dex” Kevan, a shiftless reprobate in the vein of the M.A.S.H. mischief-makers who has a chip on his shoulder about his father, reportedly a Vietnam War deserter.

Things accelerate when vicious Filipino Colonel Talan Madulás is tasked with squirreling the president’s ill-gotten gains out of the country. He’s the man who oversees Marcos’ death squads and other dirty work, with help from his conflicted subordinate Santos. When a C-130 cargo plane appears on Andersen Air Force Base in Guam, Dex discovers onboard 137 gold bars, worth over 19 million dollars.

Dex has a plan: take just enough bullion to escape notice. He recruits his best friend Ernie Crenshaw, who needs money to help his grandmother. Soon, they add Sergeant Warren Gubler, who owes a massive gambling debt, and A1C Angelina “Angel” Perez, who reluctantly joins to help her girlfriend with a family illness. As the plot thickens, these misfits struggle with heist logistics while trying to avoid Air Force authorities and, eventually, Madulás and his thugs.

The plot isn’t as propulsive as the best suspense stories, but the characters are complex and intriguing, and the Filipinos present a palpable threat. Heist planning and occasional road bumps comprise most of the book, heightened by brisk dialogue and Charles’ admirable attention to detail.

At its climax, the story offers gripping ultra-violence, offset by a surprisingly satisfying denouement.

Overall, readers will find a tasty mix of criminal conspiracy set in unfamiliar territory, all spiked with political intrigue.