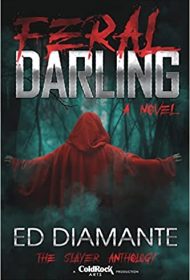 As the unlikely duo develop a love-hate rapport, they must fend off not only the Inquisitors but betrayed members of Daemiana’s coven, as well as a group of odd-behaving grizzly bears and killer whales.

There’s violence and gore galore in Feral Darling, which relishes repeatedly putting its characters through tremendous physical trauma. Some of those characters are werewolves with near-instantaneous healing powers, so they can get ripped to shreds, rapidly heal, and get ripped apart again.

Feral Darling hits the horror marks with a handful of genuinely chilling scenes. The book’s second half leans heavily into hyper-violent action-adventure, but it’s quite cinematic and never boring. However, readers with an aversion to florid writing will find this a challenge. Particularly in the opening chapters, the prose spends more time calling attention to itself than to telling the story.

The book is also hindered by some incorrect word usage and odd phrasing, as when a character is twice referred to as a “vilely beast.” Elsewhere, a character “pounce[s] to her feet.” There are several references to a church “alter.” Terms such as “whinin’” and “feelin’” are phrased throughout as “whine’in,” “feel’in,” etc.

Regardless, Feral Darling has clearly delineated characters, a propulsive storyline, and oceans of blood. Readers who like fast-paced, brutally violent action married with a few saucy scenes—and who can look past the composition’s rough edges—will be well served.