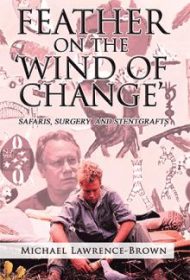 In 1960, as the sun was setting on the British Empire, Prime Minister Harold Macmillan delivered his “Wind of Change” speech, referring to the sweeping transformation of Africa. In this memoir, Michael Lawrence-Brown sees himself as a feather caught up in those winds, which propelled him from colonial Kenya to Australia, where he became a surgeon and innovator in the world of medicine.

The book is divided into four sections: his formative years in Kenya, the son of a safari guide; his immigration to Australia, where he went into medicine; “the endovascular revolution,” as he calls it, in which he was a major player with the co-invention of a stent graft for aortic aneurysms and accompanying procedures; and his later years.

Lawrence-Brown is a talented writer, with the occasional light touch. Describing his native land, he says, “Africa is such a dangerous place. Everything wants to bite, string, scratch, poison, kill or eat you.” His writing can also be poignant, such as when discussing a friend and colleague’s developing Alzheimer’s Disease: “It was like his racing brain, fuelled [sic] by caffeine and starved of sleep, was burning up. His drifting away and the tyranny of distance between us meant that I could not even provide the daily companionship I wanted to share with him in his hour of need.”

Like any good physician, he’s thorough and methodical, but this can also be problematic. Too often he veers into tedious or overly technical tangents: “I was slow to reveal all the ducts, and the dictum is that the confluence of cystic duct from the gall bladder with main bile duct from the liver must be seen…” Other passages get bogged down in detail, such as lengthy explanations of the Australian health care system, hospital administration, or the detours encountered with his team’s stent grafts.

Casual readers will likely wish for a more accessible and trimmed narrative. But anyone involved in medicine can benefit from Lawrence-Brown’s story.