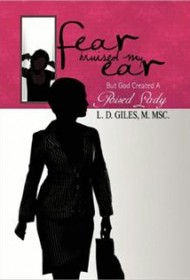 Fear Bruised My Ear is the memoir of a woman from Tyler, Texas, whose early molestation by her stepfather and clashes with her religious congregation shattered her relationship with her immediate family and led to a long-troubled personal life.

L.D. Giles begins the book from the time she was 15 years old, when her stepfather not only verbally abused and beat her with a belt but made an inappropriate sexual advance. Though her twin sister witnessed the act, her mother, who also was being abused by the man, chose to side with her husband. Not long after, Giles was accused by her Jehovah’s Witness congregation of behaving inappropriately with a “worldly” boy (forbidden because it was someone who didn’t belong to the faith). As a result she was shamed with disfellowship from the congregation and shunned by all of its members.

Feeling abandoned, Giles then moved in with her grandmother in California and later married into her own abusive and volatile relationship. Over the next several years, continually plagued with disturbing dreams and emotional scars, the author struggled to find a new vision of what God wanted of her, all while trying repeatedly to reconnect with her emotionally distant mother, who she feared had been brainwashed.

While Giles writes with conviction, her memoir is somewhat hard to follow because the many events she recounts are jumbled in various narrative styles, including present-day journal notes, flashbacks, numerous dream sequences and a splash of personal poetry. The book also contains many spelling errors and needs editing and punctuation work. On the plus side, in sharing her personal fears and doubts, Giles successfully shows how abuse and injustices inflicted at an early age can plague someone for a lifetime.

Overall, while the book no doubt is cathartic for the author, it likely will have a limited audience due to organizational and editing issues that serve to override and confuse the author’s message.