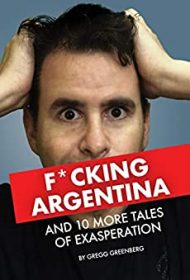 Gregg Greenberg’s F*cking Argentina and 10 More Tales of Exasperation is a collection of humorous short stories united by themes of frustration.

Here, Greenberg attempts to wring every drop of situational comedy from mundane annoyances ranging from subway odors and family road trips to stranger propositions, as in the title story, where the narrator finds himself shaken down for money by the Marlboro-smoking embodiment of Argentina: “Argentina stopped by the other day. To be honest, it’s not like I didn’t know the South American nation was going to swing by at some point…It was clear it was up to its old tricks. Making excuses…Conveniently forgetting its wallet every time the waitress arrived with the check.”

F*cking Argentina is funniest when it tackles the absurd. In one tale, Officer Krupke from West Side Story pressures his agent for a role, suggesting he could play a bad cop, but his agent objects: “That’s not the Officer Krupke the public knows and loves. You tried to stop a rumble between the Sharks and the Jets. You promoted peace between races. You’re a healer Officer Krukpe, you can’t go dark!”

In another story, a journeyman tennis player prays to face anyone but Roger Federer: “Can you blame me? It’s like he’s the illegitimate Swiss son of James Bond, Cary Grant and Bjorn Borg. I’m surprised he doesn’t play his matches in a tuxedo and drink martinis during the changeover.”

At its best, the stories in F*cking Argentina would fit in comfortably with material on humor sites like McSweeney’s, but the collection overall is uneven. Arguments conducted by text between frustrated spouses, ruined fast food orders, and Dear John letters predicated on the narrator’s dislike of Billy Joel all come off as the curmudgeonly, “get off my lawn” sort of humor that more often than not falls flat.

The weaker material drags down the collection overall. Still, readers willing to overlook these parts will find legitimately funny interludes in this offering.