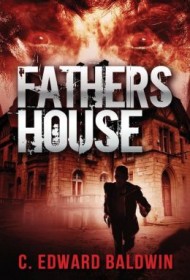 Ben Lovison, assistant district attorney for Duraleigh County, grew up at Fathers House after his mother’s murder. Mayo Fathers takes in young men at risk of drug abuse, offering after school programs and long-term residencies. Indeed, he was like a father to Ben and to many others. Fathers House might not quite be the haven it appears, however. Mayo runs a funeral home that is a presumed front for drug smuggling, and in the basement – “a virtual den of horrors” – Father’s Disciples torture enemies who interfere with their criminal activity.

As Ben investigates several murders associated with Fathers House, including a fatal beating and an assassination disguised as a suicide, he finds himself a target, all while trying to be a good father to his newborn sons. It will be a challenge to take down this crime empire when officials as high as the new gubernatorial candidate are in cahoots.

Baldwin, who also has a story collection and a forthcoming urban fantasy novel, infuses the book with realistic African-African dialect and plenty of twists. A rap performance and a shooting during a gang funeral are two highlights of the action-filled plot. The author ably twists the words of scripture (“Trust in Father”) to creepy effect. However, new characters are introduced at a dizzying rate. In addition, some may find the setup — drugs ‘n thugs, shootings, corruption, and a funeral home front — derivative of The Wire. A bit of attention to typos and missing punctuation would clean up the text.

Male bonds, particularly fathers and brothers, run throughout this novel – especially when readers learn of Mayo’s even more malevolent twin brother. Will justice win out in the end? Affirming the importance of fatherhood, Baldwin brings about a satisfying conclusion.