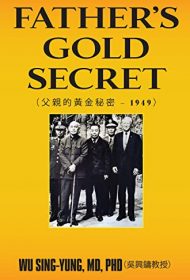 In particular, the book describes how Wu, who was Chief of Finance in the Nationalist Army, ensured that gold the Republic of China (ROC) had obtained from the U.S. was transferred from Shanghai in mainland China to Taiwan just before Mao’s forces took over Shanghai. This successful transfer, the author indicates, was largely responsible for the stability of the ROC’s government in its new home, where it immediately “had to support an army of 800,000 as well as over a million refugees from the mainland.”

Among other expenditures, the gold was used “to stabilize the currency…to import rice from Thailand and to purchase military supplies for the Nationalist Army.” Not all the gold was used, however. The author states that a portion remains in the Taipei National Vault today.

Among Wu Sing-Yung’s sources are 44 volumes of his father’s diaries given to him at his father’s death. These, along with his own memories (Wu Sing-Yung was a nine-year-old student in Shanghai when his family fled on a C-47 military transport plane to Taiwan) give the narrative an insider’s perspective into the ROC’s civil war with the Chinese Communist Party. For instance, Wu Sing-Yung characterizes Chiang Kai-Shek’s final engagements on the mainland as decoys to give him time to establish his base in Taiwan.

Wu Sing-Yung’s book is at times repetitive and crowded with unnecessary information, like a recipe for soy sauce or speculations about Samuel Song-qing Wu’s love affair. These, along with the highly detailed story of the gold, will likely be daunting for general readers.

Still, the book should garner a place in historical literature for its meticulous account of the ROC’s gold and finances 73 years ago.