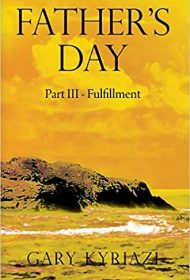 When a body is spotted at the base of a cliff in the tiny California town of La Sangre, old wounds are reopened and new secrets revealed in this last book of a trilogy.

A fisherman and his son are boating on Bodega Bay when the teen spots a body. This is the third consecutive Father’s Day that the site is the scene of tragedy. The incident makes national news as people again rehash stories from previous years: In 1984, a football legend was killed by a driver who then drove over the cliff herself. The following year, the local pastor was thrown from the cliff; his attacker was then also forced over the cliff.

The recent body renews talk of a curse on the town, which, after the previous deaths, became a “literally God-forsaken place.” Although half of the townspeople were planning to move, “The wealthy New Agers, spiritualists, Satan worshipers and Wiccans would easily pay a half-million to live within the allegedly evil environment … known as La Sangre.” Enter Jay Carpenter, a mysterious “celebrity” in town on unnamed business.

While this is, at times, an interesting tale, the story relies heavily – nearly three-quarters of the book – on past events, much of which were covered in the previous novels. While it sometimes provides further explanations about past happenings, readers of Father’s Day and Father’s: Part II may feel cheated by the lack of new material.

There are also numerous subplots and characters, which can be hard to keep track of, and this latest story will require the suspension of disbelief for non-Christian readers. While the past crimes are built on a solid set of plot points, this final act seems a contrived means to the story’s end.

Readers of the other books will likely find this a misfire. But those new to the trilogy might enjoy this novel, which will feel fresh rather than rehashed, as it will to return readers.