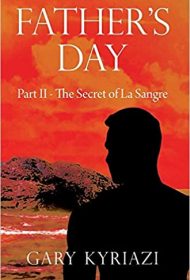 In Gary Kyriazi’s novel, a fatal accident sets the stage for a tale of secrets and deceit as it intertwines with the lives of people nearby.

It’s the eve of Father’s Day 1985, and Sal Satori, a pastor in the small California town of La Sangre, finds himself struggling through a recurring nightmare surrounding a troubling and mysterious incident the previous Father’s Day in which a woman died in an accident and a famous NFL player was found deceased nearby. More than a mere nightmare, Sal believes it to be a prophecy. In an adjacent room, Sal’s wife Connie nurses their young son and contemplates divorce.

Meanwhile, in a nearby town, Nathan Steer works to make a name for himself as a journalist while trying to sell a manuscript based on that same Father’s Day accident.

The fatal accident has cast a shadow over the “religiously insular town” and sparked gossip, rumors and theories of what might have caused it. Few are guiltier of the malicious speculation than the members of the women’s Bible study class. As they discuss their suspicions of a local couple, one of them declares, “The nerve of that atheist! She’s actually married to a psychiatrist, and they’re the devil’s spawn.”

The story opens in the present, but soon shifts to the past, moving forward from the Father’s Day of the previous year to the current one, when Sal’s belief in the prophecy may or may not prove true.

As threads of incest, adultery and deception wind through the narrative, readers will find a well-plotted story built on multiple characters whose lives have been impacted or even ruined by lies and wrongdoings. The writing is straightforward and clean, the omniscient point of view apt for the numerous behind-the-scenes stories. While religion plays a significant role, it serves largely to reveal character and establish the mood and tone of the small-town setting.

In all, Kyriazi delivers an engaging story likely to be enjoyed by a wide audience.