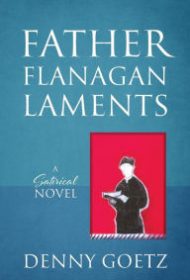 Denny Goetz’ Father Flanagan Laments is a satirical novel narrated by Father Emery Flanagan, a sex-obsessed parish priest, suffering from constant bouts of explosive diarrhea (a stand-in for his own conscience).

We meet Flanagan as he tends to a small-town congregation, lamenting the impending loss of his faithful altar boy to marriage while he wrestles with a secret crush on Emily, a parishioner’s wife. When Eric Purer, the church’s most wealthy patron, asks Father Flanagan to tutor his daughter Sally, the girl’s budding sexuality plagues Flanagan with impure thoughts that play out in a series of dark confessions and increasing instability.

Father Flanagan is a well-drawn character, and his erudite narration suits him. Here he describes his bumbling sexton acting as his caretaker: “He flopped and lurched like a seal out of water as he pulled the heavy curtains. Still, there are cracks, faults through which sunlight darts and plays.” Goetz’s skilled prose is, in fact, the main reason the novel holds readers’ interest.

The ultimate problem is the subject matter. Flanagan lusts after an underage girl, is openly jealous of his former altar boy’s fiancée, and has a surprise sexual encounter with his new altar boy. (Flanagan is either victim or willing participant depending on his reliability as a narrator.) Moreover, Flanagan is so overcome with generic lust that his feelings for Emily, originally a major plot driver, are entirely forgotten halfway through the book.

While the author may be attempting to take the Church to task for hypocrisy, or perhaps to rail against our sexual mores in general, the focus isn’t precise enough to prevent Flanagan’s actions from feeling simply predatory. Although the tale culminates in an emotional catharsis, it lacks the moral clarity necessary to redeem Flanagan and, consequently, the story.

In the end, Flanagan doesn’t grow enough as a character for us to root for him, and, failing that, the novel’s humorous elements don’t push far enough to quite succeed as satire.