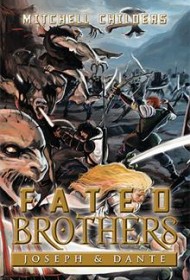 This shelf-bender of an epic fantasy adventure revolves around two human men who are inexplicably transported to a magical world located seven light-years from Earth.

The story begins with a potentially intriguing albeit not exactly original premise: two best friends, Dante and Joseph, find themselves transported from their mundane existence in Los Angeles to a strange forest in the land of Arthenon, where they witness a bloody battle between a gang of bandits and an elfin warrioress wielding two shortswords. The strange woman is a masterful fighter and eventually kills each of her assailants, but as she is leaving the field of battle, she collapses. The two men investigate the badly wounded woman and decide to bandage her numerous wounds as best they can.

The woman turns out to be Neiren, leader of the Mountain Bandits, a group engaged in a war with another set of bandits led by a ruthless killer known as Samien. The two Americans are taken in by Neiren’s group and trained in the art of war: Dante with the bow and Joseph with the broadsword. Soon they are fully involved in the conflict—and they slowly begin to understand how, and why, they have been brought to this world.

While promising, the story suffers from a serious lack of editing. The 744-page novel (which could have and should have been condensed down to around 350-400 pages) is unwieldy and bloated. Adventure fantasy of this ilk is typically action-packed and fast-paced, but in this case the reading experience is heavily weighed down with the excessive prose. The lack of any real character development (Dante is a smart-ass and Joseph is quiet, but neither have layered personalities beyond these traits), realm building, and thematic depth hamper the read as well.

In sum, fantasy fans looking for a breakneck-paced and engaging read will want to look elsewhere.